​When does advertising become art? Can art meant for the purposes of advertising be valid on its own, separate from the brand it promotes or the campaign it was created for? Are art and advertising due equal respect? These are the questions raised by a recent collaboration at Art Basel in Hong Kong. Punk, nightlife and nudity are not what the drinker might associate with the typical champagne house, but Dutch photographer Erwin Olaf and France’s oldest producer of champagne, Maison Ruinart, are not exactly a conventional match. Both have been disruptive in their own ways.

Olaf made his name shooting spreads for glossy fashion magazines inspired by punk and nightlife, often depicting nudity, and taking pictures for innovative advertising campaigns by the likes of Dutch interior designer Moooi. His work has always been artful, somewhat off-centre, rather abstract. The way his characters pose for portraits is instantly recognisable, as if Belgian painter Michaël Borremans had taken up photography. Olaf’s work gets around. The places where his talents have recently been exhibited, are being exhibited now or will be exhibited soon include Hong Kong, Tokyo, Moscow, Berlin, Málaga and Amsterdam.

In contrast, Ruinart is an esteemed but discreet champagne maker. Ruinart has a relationship with the world of art that extends to 1895 when it commissioned Czech Art Nouveau painter Alphonse Mucha to make an illustration for a poster. The result was a theatrical invitation to pleasure depicting a sinuous, flame-haired enchantress proudly raising a glass of champagne. The image caused a sensation.

Ruinart is part of LVMH Moët Hennessy Louis Vuitton. Olaf had done the photography for LVMH campaigns before, and he and Ruinart came together when the champagne maker asked him to take pictures of the ancient chalk mines it uses as wine cellars, which UNESCO has made a World Heritage Site. But Olaf’s talent is for capturing the moment, rather than the stasis of walls that have remained unchanged for centuries. “It was a nice challenge but I had a stone in my stomach,” he says of the project. “I had eight kilometres of caves and corridors and thought, how can I visualise this? I’m a people photographer.” 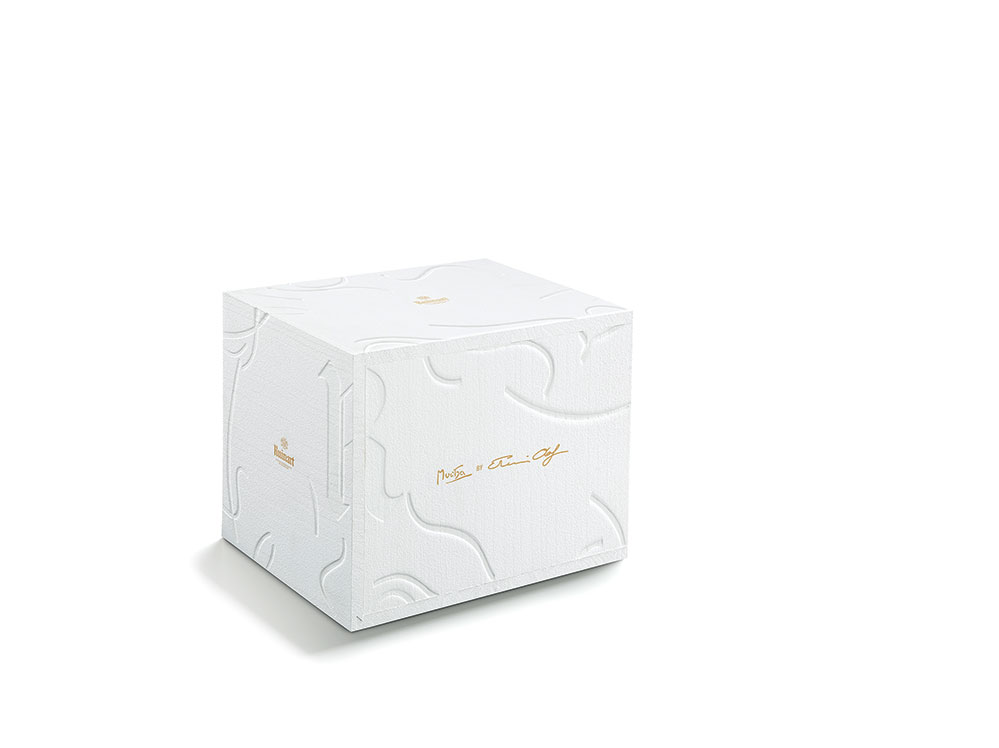 Olaf’s instinct was to change the reality. “I thought instantly of time travel,” he says. He added people to the scene – he loosely calls them “models” – but it became overly kitsch. “When you are asked to make a piece of art, you have to make something you like yourself,” he says. Ruinart president and chief executive Frédéric Dufour stepped in to help. “He didn’t like it either, so I changed the approach,” says Olaf. Instead of trying to manipulate the scene, he took a more painterly approach.

The photographer set out to capture the serenity of a place where time stands still. His pictures show how graffiti, etchings and other traces of human presence have marked the natural features of the chalk mines, and so recount the extraordinary tale of the place. Olaf’s 26 luminous black-and-white photographs reveal the stunning beauty of the cellars. “Once I changed the idea, Frédéric Dufour came, saw the simple idea and said it was much better,” the photographer says.

Olaf went with his cameras five or six times, and began to appreciate the absence from the cellars of people and voices. He found mementos that reminded him of paintings, so the project became more about the history of art. “Can you imagine if I’d shot these quiet interiors with mostly women looking sad, how kitsch it would be?” he says. “And, after all, it’s nice to go in another direction. The worst thing is to do what I’ve done before, so this challenged me to think differently.”

The pictures more closely resemble something you might see in a gallery than in a glossy magazine. “Well, we really didn’t want it to look like advertising. I can look quite negative, even dark and sinister, and painterly,” says Olaf. “We found engravings much like early original French cave paintings. If you look carefully there’s one that wasn’t planned. You can see a man, with a table and a bottle and a champagne flute. We saw that and thought, that’s really surprising. It’s somewhat similar to Chagall.” Olaf is an occasional collector of art. His collection of photography includes work by Dutchman Anton Corbijn, known for his pictures for rock album sleeves and for his rock videos; Japanese Nobuyoshi Araki, whom Olaf describes as “a little repetitive”; and American David LaChapelle. Olaf also owns one of the smaller balloon dogs created by American artist Jeff Koons.

Given the blurring of the distinction between art and advertising by photography, fashion and Instagram, how does Olaf see the future of art? “It will be mixing fashion, design, all getting more mixed,” he says. “Newer people now are less influenced by how it has been, and are far more open-minded – which I think is very interesting. Also, the future of photography as art, or illustration, is fascinating. For my own work, it means I’m moving more and more to using the camera as an instrument, and not always for photography. I combine film, sculpture, sound, so that it’s not a one-way relationship anymore. Many photo exhibitions have traditionally relied on the thinking, ‘just look at my picture.’ But now artists want an exchange, a dialogue with the viewer – a chance to make your own stories.”

Has competition and swifter exposure made it easier or harder to make a name? “I’m loving this period in the culture. The world has completely changed. I’m from a generation that is at the top of the wave. For those starting out now, I don’t know what to say. And, consider, we’ve never had such a long period without war. We have huge prosperity, but also freedom. The freedom to create your own identity, your own sexuality, and make whatever you want to make. We are in a very luxurious position, and maybe the future looks different. You don’t feel that here in Hong Kong so much, but in Europe, with IS and Charlie Hebdo,” Olaf pauses to draw breath. “Europe is under increasing pressure. That could be temporary but we don’t know yet. And now we have the refugees from Syria.” The real world is not as black and white as Olaf’s artful, luminous, lustrous photographs of the Ruinart cellars. Where does he think art begins and ends? “For myself, I have to reflect on the refugee crisis as an artist. Some time ago, I did a piece in which I’m wearing Syrian clothing, a headdress. But you don’t dare to talk about these things. Still, as an artist, I like to create an environment.”

The longer you spend with Olaf, the more you are humbled by his versatility and passion. He recently created a statue of a woman holding her hands at arm’s length in protest against the wave of sexual assaults reported in the German city of Cologne on New Year’s Eve. And he designed an exhibition in Amsterdam called Catwalk, which displays much of the collection of fashions held by the Rijksmuseum, and runs until May 15. Catwalk shows fashions from the 17th century to the present. Olaf was in charge of selecting the colours of the rooms, and designing the lighting, the displays and the catwalk that was the show’s focus. He also made a short film to accompany the exhibition.

“You can go to an exhibit and be intellectual but to me it’s like an environment,” Olaf says of the show. “Come into my dream world and go out enriched. The challenge and honour of designing Catwalk, for the most extraordinary museum in the Netherlands, came at exactly the right time. For several years I’ve been exploring alternative ways to present my photographic work and to integrate it in installations, sound, video and films – a way to immerse viewers in a world that fires their imaginations and sparks a stimulating dialogue between the viewer and the work on view. It’s the perfect pairing to my work for Ruinart.”