20 Questions With Bryanboy and Tina Leung

Long-time fashionista friends and multimedia mavens Tina Leung and Bryanboy sync their schedules for a rare tête-à-tête in Hong Kong.

T: Bryan, Bryan Grey Yambao, Bryanboy…which name do you like the most?
B: I like being called Bryan because, you know, my nickname online is Bryanboy and I feel like it’s an online persona. But I’m a real human being. I’m a real person, and my real name is Bryan.

T: Is your online persona the same as your real-life persona?
B: I wouldn’t say it’s different. My online persona is kind of like an editorialised version of me. Of course I exaggerate. I like playing a character online because you know it draws attention, it gives people a reason to follow me, but I wouldn’t say I’m that different in real life. I mean, I’m also crazy in real life.

T: Do you miss the “normal life”?
B: I wouldn’t say so. I mean, I don’t think anyone’s life is normal. What is normal? For people like me and for you, Tina, and other people who are online influencers, our lives are normal to us. We travel so much, we go to so many places, we go everywhere. But to other people our lives are fictional.

T: So now that you’re in Hong Kong, has it become your favourite Asian city?
B: Always, from the beginning. You know, Hong Kong…it’s a magical place. I’ve been to so many big cities in the world but Hong Kong makes everything look like a little village. I mean, I live in New York, but every time I’m here in Hong Kong you can really feel the energy, you feel the hustle and the bustle, everyone’s working, everyone’s neurotic. It’s just a wonderful, inspiring city and I love being here.

T: Do you have a fitness routine?
B: My fitness routine is to eat as much as I can and then dance in my hotel room at, like, five o’clock until I’m really, really sweaty. Oh, during the summer, like in Ibiza, that’s when I go really crazy. I love going to raves. I just love dancing. Dancing is like my exercise.

T: Your Snapchat is hilarious. Have you got any tips?
B: One of my most important tips for a Snapchat account: I think it’s really important to know the distinction between every social media outlet. Like a lot of people think they can be as fake as they are on Instagram and then apply the same statement on Snapchat. You have to be funny, be yourself and most importantly have a voice. People like to follow people on Snapchat because it’s a form of entertainment, so entertain people.

T: Who is your legend?
B: Who is the most legendary person in the world… probably me. I mean, I made my own legend.

​Watch Tina Leung talk about being beheaded by the Chinese empress:

B: So, tell me what you do for a living.
T: That is a good question. I do many things. I style. I edit. I write. I do digital whatchamacallit. I do trunk shows. I do so many things.

B: Tina Leung, tell me about your childhood.
T: Well, I was born in Hong Kong and moved to Orange County. Tiny, tiny little suburb. There was only one supermarket, one car park. No one locked their doors. We had bake sales, we had the little red wagon. My father was away a lot so it was just me and my sisters mostly. We loved to bake. Ride in our little Barbie car that went 3 or 5 miles per hour. Ride our bicycles and roll around in the grass. Sell butterflies and ladybugs for 5 cents. All the little things that children like to do in the suburbs I guess.

B: When did you start getting into fashion?
T: I think when I moved to Hong Kong. I had a T-shirt, a Giordano T-shirt, that was my favourite ever, and it was this man in scuba-diving gear with like a ring around his waist. And I liked my white denim shorts. We’d go back to LA every summer and I’d buy all these little tops from Wet Seal or Bebe or places like that and my father would be like, “That must have not cost very much because there’s not much fabric there.” I think from there I started reading magazines and got more into it and then borrowed my mother’s boots. She had these white leather thigh-high boots. Her feet are size 10,so way too big for me when I was 14, but I kept wearing them every day.

B: Who paid your first pay cheque in fashion?
T: Styling-wise I think my very first was at Prestige Hong Kong magazine. That was a great learning experience, I was just thrown in the deep end. That was when Prestige Hong Kong first started. I’d have to assist someone and then go back to the office and interview someone else and then write it up and do an extension shoot that night. No sleep. No pay. It was fabulous. I learned a lot.

B: Tell me about your first designer item that you bought with your own pay cheque.
T: Probably a Balenciaga motorcycle bag. It was the small one that just came out, and I think I’ll keep it forever, even though I don’t use it any more, because it has lots of sentimental value.

B: Where do you see yourself in 10 years?
T: Hopefully…I will look exactly like this. But where I will be I don’t know, because I want to be somewhere I could never imagine myself to be. Of course, a beautiful place but I have no idea because my life changes. I never knew I would be doing what I’m doing now 10 years ago, so I don’t really know and I don’t want to know.

B: Who is the most significant person in your life? Who has shaped you the way you are now?
T: I think my sisters. I’ve been not complaining, but telling people that I don’t really have a mentor or someone to look up to. I have no stronger bond with anyone than my sisters. They are the ones that have shaped me? I don’t know. Ask me in 10 years.

B: What is the most legendary moment in your life so far ?
T: Meeting you, Bryan [laughs]. My most legend- ary…I get teary just thinking about it.

B: What makes a legend a legend?
T: I think having your name live on even after you’ve gone. I think having conversations start just at the mention of your name. And making a lasting impact. I think that’s what a legend is. Hopefully I will leave a little bit of a mark before I leave this world.

Go behind-the-scenes with Tina Leung and Bryanboy at their photoshoot: 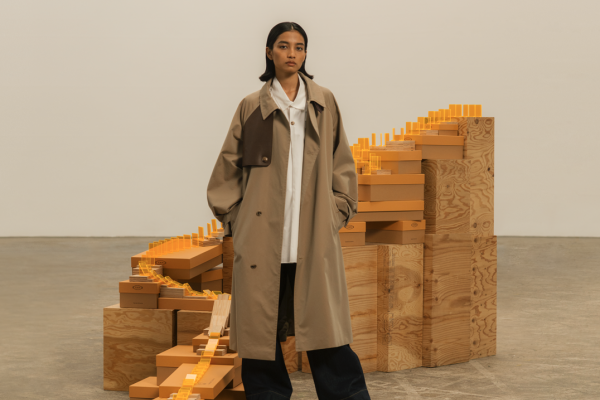