Perfumer Thierry Wasser reflects on his time with Guerlain Thierry wasser is the “spiritual son” of the Guerlain family. The first in-house perfumer to not bear the name, he was adopted into the French legacy in 2008 and has been continuing its tradition of exceptional fragrances ever since. Though he always adored plants (Wasser had a federal diploma in botany by the age of 20), his career began almost by chance. After coming across an article about Givaudan, a Swiss manufacturer of scents and flavours, the young Wasser decided to apply there. Seven years later, he became a fine fragrance perfumer with Givaudan in Paris.

Upon joining Guerlain in 2008, Wasser was given a seemingly impossible task: continue the work of his predecessors without sacrificing his own personal touch. He excelled, creating beloved scents including Idylle, Habit Rouge l’Eau, Shalimar Parfum Initial and, of course, Mon Guerlain. Housed in an elegant quadrilobed bottle first introduced in 1908, it’s the perfect symbol for Wasser himself – thoughtful and playful, with one foot in the past and both eyes towards the future. Though his scents are undeniably modern, each is emboldened by that unmistakable Guerlain stamp, a certain je ne sais quoi that has united all of the house’s fragrances since 1828. In his role as the Guerlain nose, Wasser considers himself the “artistic director for fragrances.” He travels the globe to source ingredients and, perhaps even more importantly, safeguards the history and the integrity of his house. We met with Wasser on his recent visit to Hong Kong and look back on his first decade with Guerlain.

What has been one of the biggest lessons you’ve learned with Guerlain?

A huge thing – which was very different from my past life as a “freelancer”, if you will – is being in charge of manufacturing. And since I essentially run a little factory, I also have to source for it. I learned from my predecessor, Jean-Paul Guerlain, for two years. Manufacturing and sourcing are some  of the most fun things in my trade. I spend 30 per cent of my time in Asia, Africa, Latin America and Australia just to source!

Was it a big switch, going from freelance to working for Guerlain?

Frankly, I didn’t know what to expect, as it was a new thing. Before that, I was just creating formulas and fragrances, and I didn’t have to worry about manufacturing because I just outsourced. But suddenly, you have to learn and master these specific parts of the trade.

Does that drastically change the way you design fragrances?

Yes. In order not to shoot yourself in the foot, you’re very cautious when you select  new materials. You want to make sure all the items are available, so it changes your way of composing.

Have you seen global warming affecting your access to raw materials?

Absolutely. It’s not a hoax; it’s reality. Since I go to so many places around the world, I  can see that it affects a lot of places differently. Rotten crops, too much water, too hot, too cold… it affects every place on earth. Everything is screwed up.

What happens if the weather ruins one of your crops?

Well, it’s always very dangerous to have just one source. You never know what could happen. There could be a drastic political change or horrible weather conditions, so you need to have a different card in the game. But climate change is making it more and more difficult to play this game, even with good cards.

You’ve been behind many of the legendary perfumes, such as Mon Guerlain. What does it take to create an icon?

You always aim for the moon. Sometimes it works and sometimes it only lands you a couple of yards away. You just try to express yourself at your best, and sometimes people understand you and sometimes they don’t. Of course, you always want to create iconic fragrances, because – well, do you know anyone who doesn’t love to be loved? We all want to be loved. Do you have a favourite perfume?

It’s very hard to pick from the ones I’ve done, but I do have a personal favourite. It’s called Mitsouko; it’s from 1919 and was created by Jacques Guerlain. I don’t wear it, but it is the most intriguing and amazing perfume that has ever been created. Don’t ask me why – it’s just a feeling, but for me, it’s awesome. It’s a chypre, so you have that earthiness. Chypres are a little dark and mysterious, something that approaches the unknown, so maybe  that’s why I’m drawn to Mitsouko. There’s a little smile in it, which comes from the peach. Peach was unusual in 1919, which makes it even more intriguing. It could be rather austere as a fragrance, but suddenly that  peach – it’s like a smile. It’s like the Mona Lisa’s smile – very mysterious.

Why don’t you wear Mitsouko? Is it because it’s a woman’s scent?

Male, female, men’s fragrance, woman’s fragrance – it’s all very conventional. People say: “Woody notes for boys and flowers for girls.” But why? If you go to the Middle East, men are very happily wearing rose oil or orange flower. Once, I was in Dubai in a room filled with men and I smelled Mitsouko! To me, scent doesn’t have a gender. Why do you wear a fragrance? For your own pleasure, to have fun, to feel good.

When it comes to choosing a perfume, the process is quite romantic and emotional.  Is it the same when designing one?

I’m so happy you said it’s emotional, because that is exactly how I feel! Every single fragrance you design has a story; either you made it up or someone else inspired it. But when you start the creative process, you put  a lot of your emotion and feelings in, especially when selecting raw materials. You have to be acquainted with those materials to a certain extent, emotionally.

You’ve said before that the flowers speak to you. What does that mean exactly?

You do your research! Well, I did say that, I don’t deny it – and I was sober when I said it, too! But it is, nevertheless, the truth. When you don’t source, you don’t see the entire scope and magic of an ingredient. When you do source, you go to the fields to talk to the farmers and the growers. You see that there is an emotional attachment with those flowers. Since you use them to express yourself, they’d better talk to you, otherwise you are using them without a purpose. Can you give an example of that unique form of communication?

When I first said that they speak to me, I was referring to the lavender oil for the top note of Mon Guerlain. When you smell this little blue flower, you have a sense of humility and simplicity. But to me, she said, “I’m the image of truth.” Don’t ask me why. When I first started sourcing, I was buying jasmine sambac for one of Jean-Paul’s formulas; I had no connection to it, I was just buying it. But then, after years of going to India, I noticed people were making necklaces from jasmine sambac. You offer those necklaces at weddings, festivals and temples, or if you greet a family member at the airport. To me, these flowers suddenly got real. I saw that they celebrate love, fun and joy, family and friendship, and they even transport your secret wishes to gods. And that’s when the flower started speaking to me. The social skill, the strength, the hope, the love people express with that flower is amazing. The flowers give me a feeling, an impression.

Going back to Mon Guerlain, what is the relationship between the fragrance and Angelina Jolie, the “face” of the perfume?

She’s not quite the face of the fragrance; she’s a partner of the fragrance. When I started the design of Mon Guerlain, there was no Angelina Jolie. I designed a portrait celebrating women and if you want to address a portrait truthfully, you start with truth. This is why there is lavender. The first Mon Guerlain Eau de Parfum was created without Angelina Jolie, but when she began to collaborate with us, she was involved in it all – from the bottle design to the communication. After that, I met her. We shared our stories and we spoke about her on the fields fighting as a United Nations ambassador for refugees, battling violence against women and children. After meeting her, getting to know her and seeing how extraordinary she is as a human being, I created the second version: Mon Guerlain Eau de Parfum Florale, with an overdose of jasmine sambac for all the reasons I mentioned before. So, in fact, there is a before-and-after Angelina Jolie.

You know, it isn’t in my normal routine to meet a big celebrity from Hollywood, so I didn’t know what to expect. But, believe me – big wow. You have somebody with convictions, somebody who is strong and who shares her vision. She is very impressive.

This feature originally appeared in July/August print issue of #legend 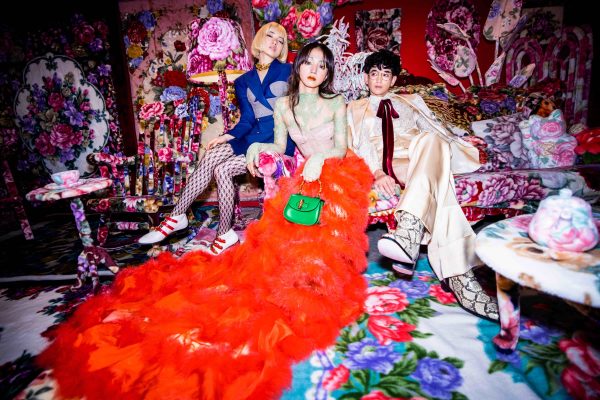 Beauty: beam me up Seoul aesthetic