Mia Kang’s journey from the runway to the ring Having been told all her life how to look and how to fit in, Mia Kang had  finally had enough. It was early 2016 and Kang was in her element. She had a Guess campaign and a Sports Illustrated Swimsuit issue under her belt – and even more amazing opportunities, including a Victoria’s Secret Angel contract, were on the horizon. Her agent told her the only thing she needed to do to have it all was to lose a little weight.

“I was in New York and I was under extreme pressure to get my hips under 90 centimetres,” recalls Kang. “People were like, ‘You know, you could take it to the next level if you could just…’ I remember being asked to go on ten days of liquids before a photo shoot. I broke down crying – and I’m not a crybaby. I’ve been doing this for so long and I’m very professional, but I just emotionally broke down.”

She continues, “I did the ten days, did the shoot and everything. But afterwards, I said I needed a break – I needed to go. I went to my family’s place in Thailand and ten days turned into nine months. I moved into a fight camp. I lived, ate and breathed martial arts and Muay Thai, and I stayed there. I came back a different woman – I came back as myself. And I realised things that I believed saved my life.”

Driving in Koh Samui, Kang regularly passed a local gym on the side of the road that taught Muay Thai. She pulled the car over and the trainers invited her to start training once a day. That turned into twice a day, which turned into ultimately asking if she wanted to move in. She did, gladly, and began training up to six hours daily, completely falling in love with the routine. “Over those nine months, I not only got healthy, I also got over all my eating disorders and the psychological body dysmorphia that you get just from being…” She trails off, then continues. “I was going to say being a model, but I’m going to go as far as saying being a woman. We all have insecurities. I watched myself gain a bunch of weight and become strong – and not only was I fine with it, but I learned to love it. I can now do things that I never thought I could do. I have a six-pack – who would’ve thought?”

Seeing Kang now, so relaxed and confident, dressed in a camouflage-printed Nike T-shirt dress and a denim jacket, casually sipping champagne at our office, it’s hard to imagine this is the same person I interviewed a year and a half ago on her big break, when she was named as one of six models in the Sports Illustrated Swimsuit Model Search competition. I had asked her then how her life had changed – and I couldn’t think of a better question to ask now. “It’s only been two years since I moved from Hong Kong to New York and I feel like my whole world has changed,” she proclaims. Looking back on the past, she says, “I think I just didn’t know who I was. Hong Kong has a very strong culture and I have always felt different. I think the difference between the last time I was at #legend and now, I feel like I’ve really come into my own as a person. In terms of body image, I’m so up for speaking about women’s empowerment. I really immersed myself in Muay Thai. The world of martial arts made me learn so much about myself – it helped me figure out who I am and what’s important to me.”

Kang calls Hong Kong home, but growing up as a mixed Asian and Caucasian child, she never fully identified with one culture or the other. And in Hong Kong, where fitting in matters and society tends to put people into neat little boxes, it was especially hard for her as an impressionable 13-year-old trying to make it in the harsh world of modelling.

“I can honestly say that from the age of one to 27, I never looked in the mirror and felt happy with what I saw. Never,” admits Kang. “I was so used to this judgement and so used to trying to conform to this standard of beauty that was being told to me.” She recounts tales of living with other models during that period: “Everybody has their own issues. I remember one roommate, we used to watch movies and television, and she would stand instead of sitting on the couch because she thought she was burning more calories. I knew a girl that literally only ate lettuce leaves and drank Diet Coke. The world is so warped. We all understand each other’s struggles – and it’s normalised.” “I’m 28 now,” adds Kang. “That’s 15 years of spending my whole life criticising myself every day and being criticised by other people.” And we’d like to think society has matured and moved on from this behaviour, but Kang pulls out her phone and scrolls through a list of interview questions she still gets from the media today. “Do you think you’re sexy?” she reads incredulously. “How do you stay fit? Are you single?” Her eyes go wide in frustration until we change the topic to more positive things.

In September 2017, fashion giants Kering and LVMH joined hands to release a statement banning the hiring of excessively thin models worldwide. The new charter, signed by both conglomerates, will ensure that all fashion brands under the two groups will ban models below a French size 34 for women and 44 for men. (Size 32 in France is the equivalent of a size 0 in the United States.) The charter also forbids the hiring of girls under the age of 16 to pose as adult models in order to ensure their well-being.

“Amazing, amazing!” exclaims Kang. “It’s baby steps. There’s a movement happening. We have a long way to go, but it’s happening. I’m so happy that brands are now doing something about it. I’ve tried to dissect the situation; where does the whole problem stem from? I really think it’s the designers – it’s the designers, trickling down to the brands, trickling down to the media, to the magazines, to TV, right down to the models.” She continues, “I hope one day we will be representing people of all different sizes and races, in a way that accurately represents and shows an attainable and realistic standard of beauty. Because – enough of this trash that’s out there right now. I’m a size 6 to 8, and I was told by various brands that I’m too small or too big. When I say I expected more from New York Fashion Week, it’s because I feel like I shouldn’t be too anything. No one should be too anything. I spent my whole life being too tall, too short, too Asian, too white, too tanned, too big and too small. Right now, beauty is beyond sizes and I hope we’ll get there one day. I’m very excited for Hong Kong to get on board with this.” It’s nearly impossible to label Kang – and that’s the way she wants it. She has a degree in philosophy and economics from the University of Bristol, and a master’s degree in finance and financial law from London’s School of Oriental and African Studies. She fights and models professionally.

Unsurprisingly, her role models are all multidimensional women who are unapologetically true to themselves and authentic. Growing up, Oprah Winfrey and the Spice Girls inspired her. So did Angela Merkel (“I did a degree in economics and a master’s in finance, and just the fact that she’s thriving in a man’s world”), Ashley Graham (“She broke down so many boundaries – she took such a beating from the industry to get to where she is now”), Chrissy Teigen (“She’s so mouthy and opinionated, and her Twitter is hysterical. Other people’s judgements don’t matter to her – you can be smart, a sex symbol, a mother, a chef and an author”) and Rihanna (“Her recent weight gain and how she handled that was so inspirational. People were like, ‘Oh my god, Rihanna gained weight’ and she was like, ‘And?’ She’s still beautiful, she’s still rich and successful; everyone still wants to bang her. She’s an absolute queen”). I ask Kang if she’s ready to come back to the modelling world. She pauses – and there’s a hint of exhaustion when she replies: “All I’m doing, day in and day out, is walking into rooms and trying to convince people that there is beauty outside of what they think there is. It’s A, exhausting, and B, harder than it looks. It’s a real emotional roller coaster because sometimes you win, sometimes you lose and you deal with a whole bunch of criticism.”

But for her, nothing compares to being in a Muay Thai fight. “My first fight was probably the craziest thing I’ve ever done,” says Kang. “I’ve jumped out of airplanes, I’ve done the highest skydive in North America at 18,000 feet – but that was nothing compared to being in a fight.” And fighting professionally has absolutely made Kang a braver person, she says. “When you stand up in front of an opponent, you need to have 100 per cent self-confidence. If you have 99 per cent, you’re probably going to lose that fight. You have to really believe in yourself and your abilities, and learn how to do that with humility and no ego.”

That’s not to say Kang doesn’t have insecurities. She knows she has flaws and that she’s not perfect. What she’s able to do now is to completely put those things aside and access the self-confidence she needs to face her opponents – no matter if that’s in the boxing ring or at a casting call. “It’s exhausting to put yourself out there, day in and day out,” admits Kang. “Sometimes you’re accepted. Most of the time, I’m rejected because I’m different. I’m  fighting for a change. The easy thing for me to do is to conform and I’d probably make more money. I’d probably be more successful. But I really genuinely believe in making a difference for the next generation.” 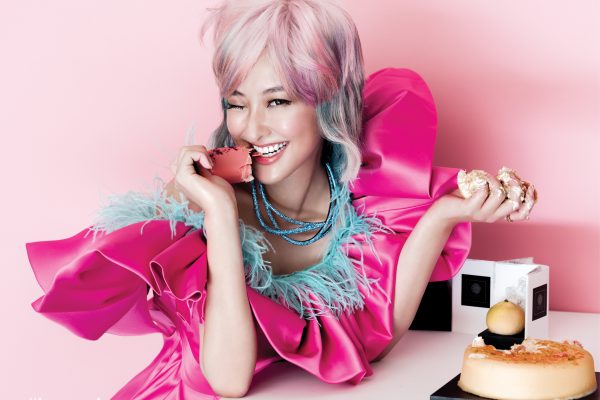