Last chance to see … Turner Prize–nominated Angela Bulloch, acclaimed British artist, in Hong Kong, and her show One Way Conversation at Simon Lee Gallery which runs until November 19. Bulloch works across multiple media, including installation, sculpture, painting, sound, light and video, her works making use of cybernetics. For this show, Bulloch presents stacks or columns of polyhedra formed in steel, with a highly stylised geometry and manufactured surface sheen that alludes to minimalism and technology. The columns are conceived and designed using a digital-imaging programme, and evoke a retro-futurity, borne of the digital realm, yet recalling the classical Modernism of Constantin Brancusi’s Endless Columns. #legend spoke with Bulloch.

You must get sick of people referencing Brancusi with this work.

I start by sitting in a virtual space inside a computer, and pulling lots of odd shapes from nothing and getting the computer to do all the complicated calculations for me. So that’s how I start. It’s not like the object is not an integral form that is hacked away at and achieved.

So you work inside-out rather than outside in?

Yes, and it starts with a whole series of numbers and calculations and forms, vectors, and it ends taking a shape, getting into a room and in reality. So you can do all sorts of crazy things within a computer, but will it actually stand up in reality is a whole other question. Let me read you something Antony Gormley wrote about Brancusi’s Endless Column: “It displays the idea that a work does not have to picture anything. It should simply be a place that can act on you as an instrument, so in some way you can feel yourself anew in the world.” Can you apply that to these works?

They are objects made in such a way that – they are totem-like. That’s because we are human and it’s nearly impossible not to have some sort of projected idea of there being other standing figures in the room, and what happens when I put together an exhibition like this, is that you have to imagine people walking around them. That’s also a good reason why it’s important to have something with a different form, like wall paintings, which are very insubstantial. That completely alters the visual concept of space on the wall as the backdrop for the sculpture. That’s another element of the tension. It’s not just us in the room, there’s sculptures and paintings on the wall and the frisson between all of us. I mean geometric forms standing there are not at all human, but I would defy anybody not to have that phobia or feeling.

What about upping the phobia by having them move? Is there a temptation to animate them? Give them a life.

I have made works like this which have animation with light.

What was the moment when Angela Bulloch happened as an artist?

I finished my degree in 1988 and it happened one month later. The Freeze Exhibition put together by Damien Hirst and myself and a few other friends, and that was the beginning of a lot of things.

Do you trade work with Damien?

He would like to but I’m not such a big collector as he is. I don’t have a big enough place to put them.

Yes, they [the architects] just won a big prize for that. When did the fixation with geometry/shapes/cybernetics start in your work?

Well these works started in January 2014. So this is a new method. I was doing The Pixel work was 2000. I’ve always held different sorts of approaches to handling things. Sculpture has always been the main thing, but I work with text, with animation, with music a lot. I do theatre, I work with political ideas.

What’s a political idea. Can you share an example?

Using text from the UN in places that look great and having them read in separate languages.

Who is your artistic legend?

Do you enjoy the artistic process of making?

Great ideas and great results from making something can be great, but it’s also the experience of making it than can be so enjoyable. It’s the enjoyment factor. It’s a bit like love. If you love something, you want rather to be somewhat amateur, to love and to love again, the act of loving is what you love and not the thing.

The name, headline or tagline of your show, One Way Conversation, who determines that. A curator or you, and when does it happen. At the beginning or the end?

The title, in this case, came out of a long conversation between me and my boyfriend. I had proposed several, and wasn’t happy with them. It’s a song called Sunrise by New Order. It’s quite dark, but as the lyrics get darker and darker the music gets more up. It’s a sort of dichotomy. That seemed somehow what you get when you work in a virtual space. You want to have a conversation but it’s not going to happen.

Will it change my experience if I come back to the gallery tomorrow listening to Sunrise?

I’m going to try it. I think it’s a good idea. I sent the lyrics to the gallery yesterday, to give them some background. I’ll listen to it later. It’s playing with expectations. In retrospect, what for you is the 20th century’s Mona-Lisa-moment in art? Is it Damien’s shark?

You know, the piece only became so famous because it was stolen. And then people would go just to look at the empty space. It was sort of like anti-art. It’s a kind of hole. One great show now is Philippe Parreno at the Turbine Hall in London at Tate Modern. It’s just a fabulous thing. It’s very now. And people should have a chance to get to see it. Use your megaphone to alert their attention to that!

What are you at work on now?

I just completed a big four-part work in four separate atria of a new building. The architect was Richard Rogers, and it’s in a part of the new Cancer Centre at Guys Hospital, London – it’s a big new outpatients building right by London Bridge. I do projects like that sometimes. It’s interesting to work alongside good architects rather than for developers. I’ve also just been approached by an important group of architects based in London but I’ve just signed a non-disclosure agreement so I’m not allowed to talk about it.

I like the ruff-like collar on your shirt. Who’s it by? 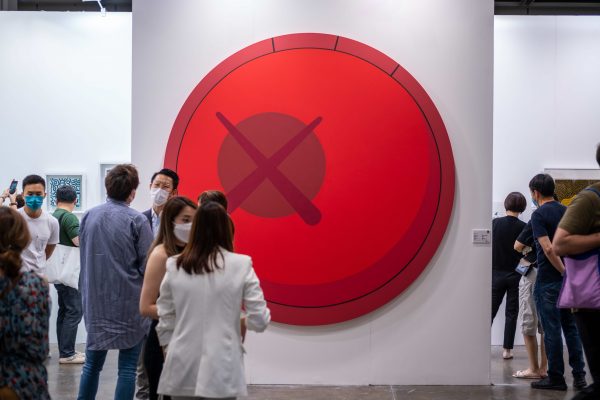