“We’ve already signed a lease for our first Salt Bae in Los Angeles — Soho is next,” Gökçe told the New York Post in a recent interview.

The viral video of Gökçe slicing and sprinkling a steak with salt made him an internet sensation and garnered him the title of “Salt Bae”. He now has almost 11 million followers and has developed a sort of celebrity cult following – last January he attended the Grammy’s with DJ Khaled. Needless to say, since its opening, people have been flooding the mid-town location of the Turkish steakhouse to take selfies with the living meme and to snap the salting ritual for their Insta-stories.

According to the accounts of clients and critics, everything, from pins and shirts to knives and table cloths in the New York restaurant carries the #saltbae hashtag. Every night, Gökçe performs his show for each table that orders the now famed “Ottoman steak” or, rather, those eager enough to spend a disproportionate amount of money (around USD$300-400 per person with a glass of wine) to see a living meme in action. Geotags and selfies prosper, but no one, apparently, goes there for the food.

While the reviews of the meat’s quality and the dishes in general are mixed, almost every critic and customer agrees on something: Salt Bae’s temple is overpriced and is not even a restaurant per se but an attraction. “Nearly all of the cuts are wet-aged Wagyu beef, and thus a little rubbery and low on flavor, though nicely marbled with fat. If, on the other hand, you appraise the place as dinner theater, you will find it satisfying — but only if Salt Bae is in the house,” food critic Robert Sietsema of Eater NY wrote after visiting the steakhouse. “One visits Salt Bae to see for oneself that that the mythic creatures of the internet also walk among us, that the endlessly replicating realm of memes can include us, too. In a world where nebulous social media influencers get paid thousands of dollars for a post, is it really absurd to pay a mere $500 for Salt Bae to slip into our feed? No, it is human. And humans are idiots,” Joshua David Stein similarly argued on GQ.

The Nusr-Et Steakhouse is just the latest example of a cultural phenomenon that has been dominating – and regulating – food trends for a long time. It’s not about the food itself, but about it’s social buzz and it’s viral potential. Dishes, drinks, and geotags in stories and posts all contribute to the specific aesthetic of “foodstagram.”

The slightly depressing yet predictable success of Salt Bae in New York City reminds me of “The Shed at Dulwich,” an imaginary London restaurant that made world headlines last November. Essentially, Oobah Butler, a VICE UK writer, managed to bring a fake restaurant to the number one ranking on TripAdvisor in all of the British capital.

Thanks to fake reviews, appealing pictures and a website that gave the place a sense of exclusivity, Butler basically created the illusion of a cool place where, if you really count, you have to secure a table – and a picture – as soon as possible. Influencers, celebrities, bloggers and Londoners of all walk of life tried to make a reservation in the writer’s messy garden in East London at any cost.

While the experiment was meant to show the limits of TripAdvisor as a reliable review aggregator, it’s also exposed the power of illusion and perceived popularity in the food industry. Both the Nusr-Et Steakhouse in mid-town Manhattan and the “Shed at Dulwhich” are representations of the contemporary dining experience, which undeniably revolves around instant gratification and Instagram.

Göyçe is not new to the restaurant industry and owns a chain of steakhouses with branches in Istanbul, Abu Dhabi and Dubai. For his part, he’s rightly riding the tide of his internet fame. Because, in the end, the theatrical blaze behind his persona and his steaks is exactly what “foodies” around the world are looking for. “It’s beautiful. There is an energy here. New York is the center of the world — and I’m here to stay,” Salt Bae concluded in his interview with the New York Post. 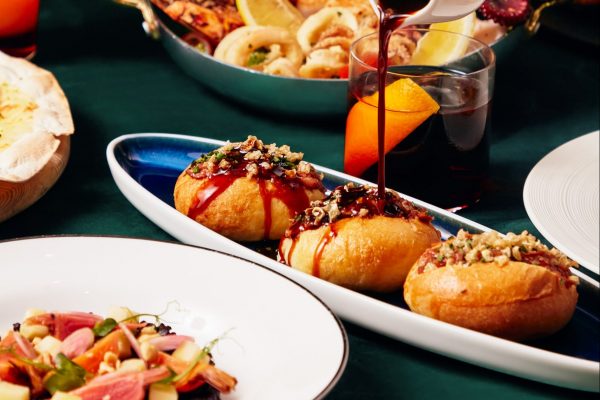