The summer months, for most, tend to be when the burst of energy from spring is drained by warm sunshine. Not so for Pipilotti Rist, who is at work in her Zurich studio on a hot Tuesday morning midway through August. Rist is putting the final touches to two endeavours, one in Switzerland and the other in Australia. Rest is a luxury for an artist of her stature.

She counts more than 40 solo exhibitions in the past decade alone, including a record-breaking retrospective at the New Museum in New York last year. Rist was born in 1962 in Grabs, a village in Eastern Switzerland. After studying commercial art, illustration and photography in Vienna, and video in Basel, freelance jobs followed. Aged 22, the visual artist held her first solo show in Vienna. I’m Not the Girl Who Misses Much in 1986, Pickelporno in 1992 and Ever is Over All in 1997 were works that would eventually make her as one of the most significant figures in the world of art.

Rist is a performer, a singer and poet, as well as a visual artist. In playing these roles she gives equal weight to each in her new media installations. Her work includes her early single-channel videos, shown on monitors, to her more recent immersive projections onto walls, ceilings and floors.

Rist’s studio is in the basement of a building in a quiet street west of central Zurich. She has occupied the space for nearly 20 years and witnessed the evolution of the district from a traffic-jammed arc of the commuter belt to a gentrified suburb with flourishing businesses. This is her second home.The closeness of Rist’s attachment to the district is palpable as she recalls making Ever is Over All, which she shot a few streets away shortly after moving in. The projection shows a young woman gleefully parading along the pavement, smashing car windows with a long-stemmed flower. This infectious symbol of empowerment is as fresh today it was 20 years ago. Beyoncé replicated it last year in her video for Hold Up. Rist’s studio is divided into several rooms and each has a purpose. The office, where her team work on desktop computers, also serves as the reception area. It leads to a dining area and sitting room with a table in the middle and a small kitchen nearby. At the back is a hardware workshop, a costume room and storage room where precisely labelled cassettes, DVDs and memory cards are archived.

Rist has a private space, separated from the studio by sliding doors, where she can concentrate away from the commotion of the office. Unlike the other rooms in the studio, there are no windows set high in the walls near the ceiling. This allows videos to be watched in complete darkness. But everywhere there are objects, images and colour. It is organised chaos, full of life – just like Rist’s art.

In the middle of the office sits a model of the third floor of the Museum of Contemporary Art Australia, in Sydney, put there so Rist can see in miniature how to arrange the forthcoming exhibition that will survey her career so far. Called Sip My Ocean, the unusual title is taken from a piece she made in 1996, a mirrored dual-channel video in which bodies, teacups, television sets, toys, plants and coral dance to a languorous cover of Chris Isaak’s Wicked Game, swirling and then sinking underwater. “I don’t remember how I came to this title, but I remember what I liked about it,” Rist says. “It’s like an offering, a reminder that a human being is endless – not only in a physical way, but also in what a person can imagine, or do, or start, or not do – as endless as an ocean. It’s very ambivalent in a way that it further refers to the garbage in the oceans. But it was made in a time when the coral reefs were not yet endangered.”

Rist has had the idea of making a video about destroyed coral reefs, in the context of her recent study of colour. “It has become clear to me that colour is always a symbol that something is alive,” she says. “If coral dies, it loses its colour, just like us. We become grey and white.”

The doll’s house representation of the Australian exhibition shows the various rooms where, come November, each work will be shown: Das Zimmer, Administering Eternity, 4th Floor to Mildness, Sip My Ocean and Ever is Over All. A large section will be given over to her latest version of Pixelwald, in which a film is enlarged so its individual pixels appear to hang in plastic spheres from the ceiling. Each installation suspends the law of gravity, lifting the viewer into Rist’s mesmerising universe. The engrossing quality of the artist’s work is what makes it so appealing.

“The most important questions are how we obscure the incoming light without blocking the rooms, how we map the videos onto the walls and which wall colours will make the works stand out the most,” Rist says. “It should look effortless. We either choose to hide the machines completely or to make them part of the work, but nothing in between. It’s quite similar to interior design.

“In fact, I don’t think artists are special. The only difference between applied arts and fine arts is that the latter looks freer. But, in the end, we also have so many constraints, like how many days we have to set up, how much help we can get, what machines we can use, the budget. These are all limits. Of course, that should not be visible when a visitor comes in. Often, the more work is put in, the less work you feel.” The planning of the Sydney show was painstaking and has been more than two years in the making. With the containers shipped, Rist has time to focus on perfecting another challenging commission: her installation for the Fondation Beyeler fundraising gala in Basel.

As this year’s artist of honour, Rist must create an artistic concept for the gala for the modernist collection. Her video-based work, projects abstract designs – some bold colours, some noisy patterns – onto the guest’s tables. What looks at first glance like the setting for a small dinner party in the artist’s studio turns out to be the prototype for the piece.

“It was a tough project,” Risk says. “When I proposed it, it was almost impossible to do with this limited budget. But that’s been my whole life – always trying to do something impossible and then, in the end, achieving it. I learnt that from men.

“When I was working in industrial studios, I realised that when someone would ask something of men, they would say, ‘Yes, I am doing it,’ even if they had never done it before. I saw how they just bluffed. It’s a thing that women often don’t use because we take our fears too seriously. It’s a method.”She watches intently as a spiral of colours unwinds across the white tablecloth and the crockery. “It’s too fast,” she says, before resuming her musings. “How can you tell a young woman to be brave without then becoming egotistic or selfish? It’s a fine line.” Rist has been dancing along the line between bravery and egotism all her life. From the outset, her inclination to question social conventions and rules has been a driving force. She hopes to make her viewers see the world from a new perspective but always tries to make the novelty positive. “Artworks are like new friends, but without the consequences,” she says. She likens art to a form of religion, calling it a collective meditation that elevates the spirit.

The artist was religious as a child – not, she says, because she was brought up that way, but because she chose to be, feeling strongly that she had a duty to believe. That feeling has morphed into a feeling that she has a responsibility to instil hope by using her imagination and her power to express publicly what she imagines.

“I would not say that I have more fantasy than others, but I use my life and time to make propositions,” Rist says. “We think and live in layers, but it’s hard to find images or tangible metaphors for them. When I ask my partner what he sees when we kiss, I don’t believe him when he says nothing. I think everyone has endless creative fantasies, but it’s a question of concentration. And that is, in a way, what the artist’s job is – to try and bring out the things which are otherwise isolated.”

Rist has purpose in life and work, and persists in pushing back the boundaries that constrain her. She told #legend she intends to close her Zurich studio and move to Japan by 2020. She will own two caravans – one to live in, the other to work in – which she will park in people’s gardens in exchange for money.

“I am just fascinated by the place, not that I understand it. It has to do with this idea of not being capable, but doing it anyway.” 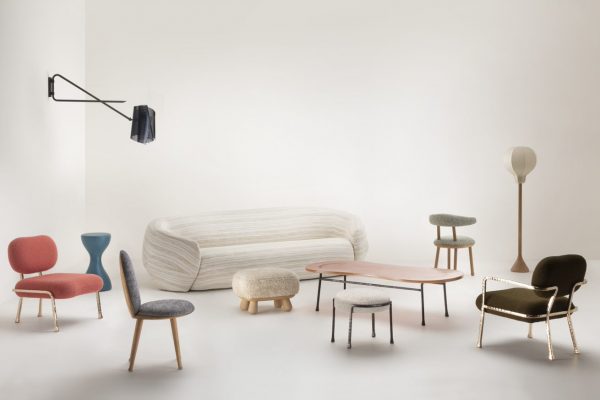