In Georgia, Winemaking Is an 8,000-Year Tradition Some winemaking countries conjure up specific images in our collective imagination. Italy has its sun-burnished hills and France its imperious chateaux. Others are but a faintly exotic blur in the mind’s eye, such as Georgia. Georgia is often lost somewhere in a lacuna in people’s knowledge of geography. And people could be forgiven for being ignorant about the country, its situation being more of a deterrent to visitors than an attraction. It abuts Russia, Turkey, Azerbaijan and Armenia, and is a near neighbour of Iran, Iraq and Syria.

Yet Georgia is the world’s oldest winemaking country. It has been making wine for 8,000 years. Some say the word “wine” is derived from the Georgian gvino. The country is famous for its amber wines, made in clay vats. What oenophile could pass up the opportunity of a visit.

Georgia sits at a crossroads of history and its position has made it an eclectic cultural accretion. The county has been overrun by the Persians, the Hellenes, the Romans, the Persians again, the Arabs, the Byzantines, the Mongols, the Ottomans, the Persians yet again and then the Russians. Only for a brief period between the 11th and 12th centuries, and since the collapse of the Soviet Union, has Georgia been free of an alien yoke. Yet no conqueror has succeeded in uprooting its language. Georgian belongs to the Kartvelian family of languages, which is unrelated any to other known family.

Their language is what distinguishes Georgians from the invaders, along with their intoxicatingly polyphonic music, and their sublimely stinky sulphur baths – and the bulbous glory of their wine vats of red clay, called qvevri, pronounced “kveh-vree”. Georgia has 525 varieties of grape, more than anywhere else in the world. The quality of the grapes seems inversely proportional to how easily pronounced their names are. Among the most popular are the structured white Rkatsiteli and the musky white Mtsvane. Saperavi, a brilliant, dark red grape, is an exception in that it is both good and its name is pronounceable.

The outside world cannot hope to imitate the qvevri or the music, but one manifestation of Georgian heritage is ripe for appropriation: the tamada, or toastmaster. A representation of this figure of tradition stands in an otherwise unremarkable street in the capital, Tbilisi, perched roguishly on a rock, raising his drinking horn to toast us.

It is a model of a bronze statuette that dates back to the 7th century.

The tamada is the dictator of the supra, or traditional Georgian feast. The best tamada can take the litany of time-worn themes – tradition, home, health – and with them weave a paean unsurpassable in eloquence, poignancy and humour fit to re-connect those present to the ever-present past.

If tradition has an inanimate embodiment in Georgia, it is the qvevri. The qvevri is the great-grandchild of Neolithic vessels unearthed in southeastern Georgia. These vessels unearthed contained traces of tartaric acid, indicating the former presence of grapes, and fossilised pips, suggesting that wine was made in Georgia millennia ago. Today, an estimated 30,000 Georgian households keep qvevri in their yards, for producing wines that range from the miraculously perfumed to rather smartingly vinegary, as #legend discovered at a tasting of the output of small winemakers in Tbilisi’s painfully hip Vino Underground. Masters of the craft of making of qvevri are, tragically, a rare breed. Between three and eight remain, depending on whom you ask. #legend had a peek at how they practise their ancient craft in the ramshackle workshop of Zaza Kbilashvili in Kakheti, in eastern Georgia, the country’s best-known wine-producing region. Kbilashvili slowly pats into shape what look like titanic Easter eggs. The qvevri are made of chocolate-coloured clay, which only Kbilashvili knows the exact origin of.

The clay is applied layer by layer. Each layer needs up to five days to dry. Each two-tonne vessel is made of about 16 layers. If sultry weather delays the drying, the whole egg can buckle. The result is fired at 1,200 Celcius or as near as possible. If the temperature is too low, the qvevri will be too porous and bacteria will take up residence, shortening a wine’s road to perdition as vinegar. Once fired, the qvevri is lined with beeswax for further protection against undesirables. The sides of the vessels are a mere 3-centimetres thick, so they hardly look robust enough to endure for centuries as they can.

The finished products are taken by land or sea to cellars near or far, as far as Australia in some cases. The qvevri are then buried, usually in cellars of a customary Georgian pattern called marani. There the vessels live out their days cocooned the near-constant temperature of the earth, looking like vast blowfish, their circular lips protruding above the floor, as if gasping for air. Winemakers wary of earth tremors coat their qvevri with concrete, but traditionalists eschew this practice.

To make traditional wines in a qvevri, red or white grapes are crushed and the result, along with the seeds, stems and skins is allowed to ferment. Once fermentation is complete, the mouth of the vessel is covered with a slab of slate, which is sealed in place with a coil of moist clay. It takes about six months for the solids to settle in the bottom of the vessel, after which the miraculously clear wine is drawn off. 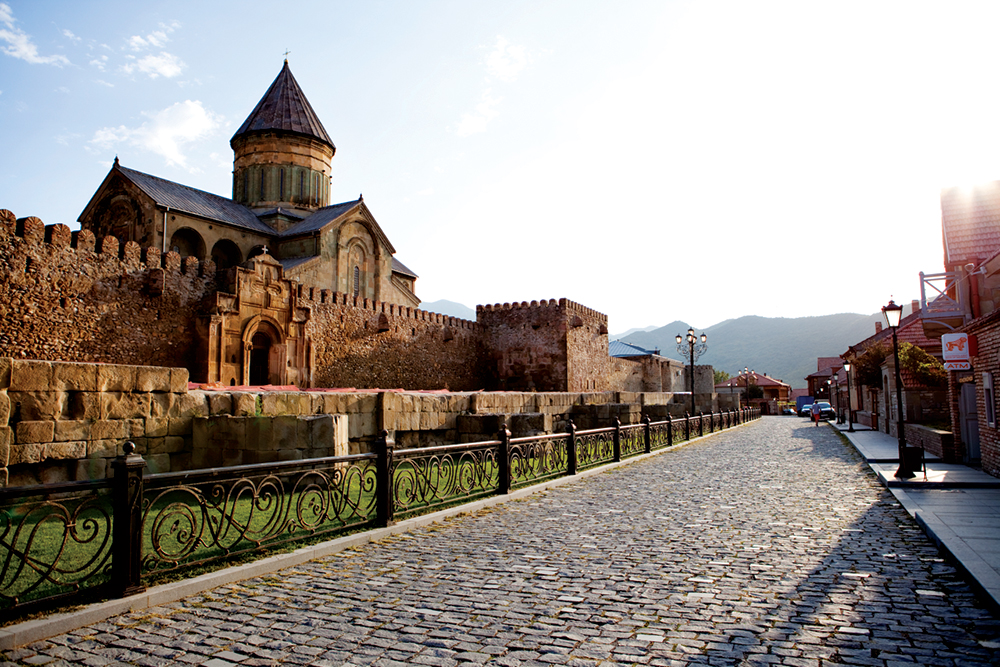 Tradition is omnipresent in Georgia, in ways unthinkable in much of the outside world, yet it matters little to younger Georgians.

The younger generation can sound almost apologetic about what they perceive as the humbleness of Georgia in comparison with their ideal of the Western world, which the Georgian elite is so keen to join. This mixture of desire for the new and persistence of the old can have strange results.

A case in point in the Georgian winemaking industry is Château Mukhrani estate. The grandiose chateau and its name profess an almost painful yearning for Frenchness. Yet, while Château Mukhrani wines do have a French accent, the grapes they are made from are to an increasing degree native. The estate’s Saperavi grape is a smoky gem. The experimental part of the winery now has a concrete egg developed in an effort to mimic the way a traditional qvevri serves to make wine. Tradition protrudes through the veneer of modernity.

Georgian life is lived under the gaze of the Caucasus mountains, which stand wrinkled and ominous in the distance, like forefathers sullen after years of setbacks. Yet the plains are warm and fertile, particularly in the west of the country, where they stretch down to the Black Sea. Grapes, walnuts, hazelnuts, citrus fruit and tea grow in abundance, providing ample ingredients for the supra so beloved of Georgians.

A supra is not a meal for the nibbler. #legend’s first was so protracted that we had to miss three courses to be on time for our next appointment. The fare included eggplant rolls with walnut sauce, spinach and walnut balls, cheese-enriched flatbread (known as Georgian pizza), oddly foamy but addictive cheeses, glossy joints of pork and spice-perfumed chicken. All was generously spiced with chilli paste or a fragrant blend called khmeli suneli.

The food brings to mind one version of Georgia’s creation myth. Georgians, busy at table gorging and toasting, miss the memo that God has finished creating the earth and is about to hand out the goodies. Arriving at the appointed place well after dark, they learn that nothing remains for them. The Georgians insist they arrived late only because of their preoccupation with toasting the Almighty, who – moved by their piety – handed over the land he had planned to keep for himself. Georgians have a fixation with health and healing, perhaps because many of their ailments are self-inflicted. The sulphur baths which perfume the old town of Tbilisi are considered the ultimate hangover cure. Wine made in a qvevri is often prescribed for conditions such as high cholesterol. Georgians consider wine good for the soul, too. Their country clung tenaciously to Christianity and its associations with wine long after Islam claimed the surrounding lands.

Bathers in the sulphur baths are given a merciless scouring by an attendant, which is not unlike the scrubbing required to clean the inside of a qvevri. Cleaners of qvevri used to make wine that is fermented along with the seeds, stalks and skins of the grapes must climb inside, in the knowledge that they may be unable to climb out unaided, and so may perish there. Romantic tales have it that a cleaner’s polyphonic singing from within a qvevri is a signal that the cleaner is not yet dead.

For a taste of the real Georgia, visit Iago’s Wine, a 300-year-old marani with 15 qvevri. The proprietor is Iago Bitarishvili, a hawk-billed man, suitably narrow at hips so he can easily climb into and out of a qvevri.  Bitarishvili is a perfectly understated ambassador for Georgian wine. Looking at the dusty track leading to his cellar, you would never guess his wines are poured at The Ritz. The wines are made from the Chinuri grape, a brightly acidic white grape with a modicum of tannin.

Georgian wines taste of what Georgia makes you feel. A Chinuri made without the seeds, stalks and skins of the grapes has greater purity, tasting of nothing so much as Hainan chicken rice (with the broth and ginger but without the chilli) and olive brine. Last year’s vintage of the Chinuri made with the seeds, stalks and skins is darker, like amber and oud, fenugreek and dried mandarin peel.

These are all familiar elements but the combination of them is utterly unfamiliar. The wines are assemblages that seem not quite certain how their parts should hang together, yet the parts slowly coalesce into a clearer picture as you sit, patiently contemplating Georgia and its bounty.