On the eve of Sotheby’s S|2 exhibition “They Would Be Kings” in Hong Kong, #legend speaks to London-based dealer and curator Steve Lazarides about the future of street art.

You’ve been so anti-establishment for so long. What made you hook up with Sotheby’s and this show in Hong Kong, “They Would Be Kings”?

Everything I do sounds contradictory to doing at show with Sotheby’s, but, they were one of the very first companies, or group of people, to put faith in us at the beginning. Sometimes there are just forward-thinking companies, and people at them, and Sotheby’s on Bond Street, London was one of them.

Street art hasn’t gone down well with the art establishment on the whole, has it?

The movement of this style of art is popular. I don’t mean that in a bad way, I like populism, it has good things, but it’s popular because people like it. But you know, if you say the word ‘populism’ in the traditional art world, everyone starts running for the door. But this isn’t art you need a degree for, and it all goes back to the premise: do I like it or not? It’s about being able to buy art without feeling stupid. And I feel that about my art. I like people coming around and being able to take what they want rather than being told what they should feel. That other stuff is for a certain strata of society. If that’s what floats your boat, go for it.

What is art to you?

It’s a fundamental human need. From a mother in Africa to a penthouse in New York, there are very few places you can go in this world where there will not be anything adorning the walls. Now whether you decide to call that decorative stuff, or fine art, it doesn’t matter. You know, people have a natural affinity towards art, and I think the art world has been intent on driving those people away from it for quite a long time.

What do you think of galleries like White Cube, Lehmann Maupin, Ben Brown, coming in to Hong Kong with their highly and heavily curated selection of works?

You know, China’s an awfully big place, with a lot of great art and great galleries. It doesn’t really need some expensive Western gallery coming in and telling them what’s what.

What’s the biggest misconception people have about street art?

It’s always makes me laugh when I talk to journalists about street art and it being a movement. To be honest, it was already so big in 1974. Norman Mailer was writing articles for Esquire and publishing books [The Faith of Graffiti] about graffiti. That means it was probably five years preceding that, so you’re talking mid-60’s, and if you start looking at some of the guys who were massive at the time, like Jean-Michel Basquiat or Keith Haring, they’ve now been airbrushed out of history for being graffiti artists, because the art world doesn’t want to admit that graffiti had done pretty damn well.

Andy Warhol never did any graffiti work, did he?

He was having too much fun making money out of screen prints. He’s been on my list of people that demonstrate how boring shows have become. I wonder how annoyed he’d be if he could see the way his work is displayed now. That man looked like he was having a fxxxing ball. That’s the sort of show I would have loved to have gone to. But now, it’s all about exhibitionism, and it’s all about commerce. I think people have learned the art of showmanship.

Is there any graffiti/street art in the digital world?

My answer to that would be ‘yes probably’, but not yet that I’m aware of.

You’ve had the gallery in London for a decade and here in Hong Kong you’re promoting the best of the best of the artists and their work at Sotheby’s. Where does street art go next?

“I’m not seeing a lot of new stuff that I like. There are no new kids who seem to be coming through and kicking down the door. I’m starting to miss new faces. The world was a different place 15 years ago and the West has started to become very settled, passé. I think from places like Bolivia, Chile, Moscow, China, something will come. I’m looking for innovators. Maybe one trend is that these guys, like JR, Vhils, Osgemeos, are starting to get more museum shows, at least in America, not in the UK. I never understand this. Your directive as the head of a museum is to keep the general public happy; you’re an institution, so put on things that people actually like. When these guys do shows these galleries get some of the biggest attendances they’ve ever had. And I don’t think that’s a bad thing. I know you’ve got intellectuals around the world grieving with their head in their hands pronouncing the death of intellectualism in art, but maybe it’s the birth of something new.

What’s been the ‘Mona Lisa-moment’ in street art?

I don’t think there’s been one. It’s been a slow and arduous route and it’s only just begun.

What is the most expensive piece of work at the show?

Probably the Banksy piece. I’m pretty sure it’s Bomb Middle England, a lovely piece of art. I remember years ago it cost £149.99, when it was a canvas flung in the back of my car. I’m not sure what the values on the Basquiat and Haring are, but the two most expensive pieces in the show are that Banksy and the Osgemeos piece [El Salon de los Miagros]. These two guys are two of my favourite people in the world and they have such a good ethic. The go out painting together every Sunday morning, it’s a tradition they’ve done since they were kids.

What’s your favourite art work in the show?

Invader’s Rubik James Bond Girl. It was one of the key pieces I had in a show in New York called “The Outsiders” in 2008. I remember the day of the show, I woke up in the hotel room, turned on the TV, and it was the day Lehman Brothers collapsed. I have a great deal of affinity with that art work.

You have people like Ronnie Wood and Dennis Hopper as collectors. Do you get many/any from the fashion world, like Karl Lagerfeld?

No. Not really. We’re kind of off the radar when it comes to a lot of designers. We tend to be more with the ‘homework crowd’ – that is, people who do a bit of digging about what’s going on, because we’re not in the art papers, we’re not at those kinds of parties, or rocking that kind of aesthetic. Damien Hirst is a collector of yours, yes?

A lot of people have a lot to say about Damien, but to me, the man can do no wrong. He’s Robin Hood. He used money that he made, bought from people like us and other young artists, and lots of things that nobody ever really talks about. He looked after his staff amazingly well. And yet, he gets so much shit for what he’s done, when in fact, he’s done so much good.

You’re like an art disruptor on another level, or sub-level, right?

I think I’ve just got a built-in love of the underdog; it doesn’t mean someone’s work is better or worse than someone else’s just because it’s not in the Gagosian, or in the Tate Modern. It’s a lifetime mission. I know some boundaries will never get broken down, so instead, set up your own thing.

Sir Ronald Cohen. He has more humanity in his little finger than most nations put together. 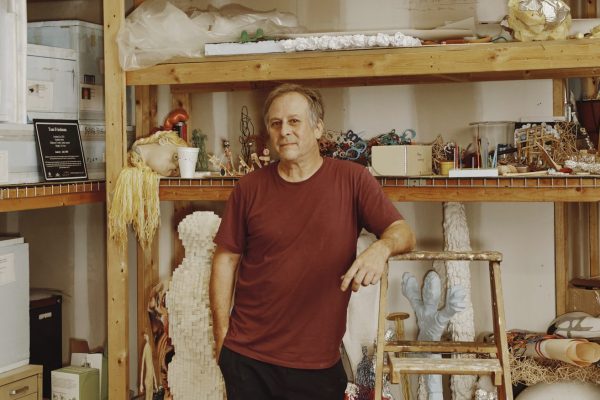