“When you grow up in LA, real life and the movies can get a little mixed up,” says the voiceover to Alex Israel’s teen surfing drama SPF-18. If you aren’t familiar with Israel or his work, it’s important to know how he looks on Instagram. So he’s chatting with Molly Ringwald, Paris Hilton, Rosanna Arquette, Benjamin Millepied and China Chow. Then he’s posting pics of himself with Beyoncé, who visits his Gagosian show in LA. There he is with Naomi Campbell and Kim Kardashian, with whom he visits the Los Angeles County Museum of Art. There are selfies of him with icons such as actor Warren Beatty and singer Stevie Wonder. He posts pictures of Prince, Taylor Swift and his own attendance as a Belieber at Justin Bieber’s Staples Center concert.

Keep scrolling and Israel retrograms a photo from 1994 showing Britney Spears and Christina Aguilera together. There’s also a shot of him by a statue of Marilyn Monroe with the words: “Happy birthday Andy Warhol, Richard Prince and My Mom!” He posts art selfies with luminaries and art peers like Jonas Wood and Mark Grotjahn, and you’ll even find artists like Ashley Bickerton and Jordan Wolfson posting on his site, as well as the ever-present author Bret Easton Ellis, with whom Israel realised a collaborative project for Gagosian three years ago. There’s even a shot with the covers of a few of his favourite films – Clueless, Sixteen Candles and Ferris Bueller’s Day Off, and a photo of Israel with Instagram co-founder Mike Krieger. How real, or unreal, or irreal, is that? And what is reality? Israel engages and mines the “food chain” of show business, interrogating and confounding the American dream. He channels celebrity culture, surfer optimism, and the pursuits of luxury and thrill. He approaches his hometown with a curious blend of local familiarity and anthropological curiosity, and his work alludes to both California cool and calculated brand creation – the upshot of which finds him standing in a T-shirt, slacks and trainers at the Gagosian gallery in Hong Kong on the eve of his inaugural Asian show, New Waves, in May. The exhibition includes multimedia works related to Israel’s first feature-length film, SPF-18 (2017) – a teenage romantic comedy touching on themes of love and loss, available on iTunes and Netflix, with the beating sun and the crushing waves of the LA coast giving each scene an ethereal, nostalgic quality.

The film incorporates the colours and textures of surfing equipment, from surfboards to slick wetsuits. To form the wave logo, pieces of neoprene were sewn together and stretched over canvas supports. Subsequently, they were cast in fibreglass and airbrushed. They recall Japanese artist Hokusai’s famous woodblock print, Under the Wave off Kanagawa (c.1830), as well as the West Coast artist and surfer Ken Price. Most interestingly, New Waves marks the debut of Israel’s LA-based clothing brand, Infrathin, with unisex apparel available for sale in a pop-up store in the gallery’s lobby. The line will also retail through various global outlets including Dover Street Market. “It’s a lifestyle exhibition,” this writer declares. “I think that’s fair,” agrees the artist in his trademark shades, whose persona hovers somewhere between dudester, nerd, man-child and guy next door, with professional monikers including writer, filmmaker, broadcaster, sunglasses-and-fashion designer, and artist. Israel seems to be the contemporary West Coast Andy Warhol of the 21st century.

As happens with Israel, he takes a tangent, only to return to the source of the conversation. “I think of the wave as a sort of interesting metaphor. You can go with the wave or against it, or ride on it or against it. And you can gain momentum, do tricks on it, use it to your advantage. If the idea of lifestyle is the wave, then I think there’s something to that. I want to be speaking the language of the culture of our time, and that’s lifestyle. That’s not to belittle, or poke fun or criticise that way of thinking…” It’s one he so evidently endorses and espouses (See his recent collab with French swimwear brand Vilebrequin). “If I want to do that through objects, and how they can communicate, or the way a logo can, then so be it.” Israel’s approach smacks simultaneously of the familiar and the off-kilter. This show, which parades a contemporary instant-likeability, is total eye candy. The walls of Gagosian’s art emporium have been painted a sort of terracotta pink-orange and make the space feel Wonka-esque. Israel calls it “LA colour” and says the palette comes from the film, mentioning references such as Spanish tiles found in courtyards. “It’s about colour relationships between paintings and among paintings,” he explains. “You create rhythm through serial repetition; again, it’s like pop music, where you have verse, chorus, verse, chorus. There’s a rhythm to the way these paintings fill the space.” In fact, though he doesn’t acknowledge it (the inventory of his influence appears so wide-ranging), the gallery looks a ringer for certain rooms in the art deco hotel Bullocks Wilshire in Los Angeles.

What’s soon apparent with Israel is how fluid his universe is, and how intertextual and transferable it is, so that each element of his visual vocabulary may reappear, or be recycled, remixed or completely transformed. He’s a serial creative – a sort of shiny, happy Patrick Bateman minus the blood, rodents and overly ripe French cheese. And he’s total pop in his art and musical tastes. Does he have a favourite pop song? “What inspires me about pop music is that there’s always a different one,” he says. “You fall in love when you hear a certain song and you keep hearing it on the radio for three months every day, and you think there will never be another one like it. You think, ‘This is it, this is the ultimate, it can never get any better than this.’ And then three months later, it does. That’s what’s so exciting about pop music. It’s like an endless stream of creativity. It has been for as long as I can remember. I grew up listening to the radio every day.”

Talk of pop has him disclose another interesting insight. “I’m not a real surfer,” he concedes. “I’m an aspirational surfer.” He also professes to get much of his inspiration from that other LA fixation: driving. “There’s always music, so I channel-surf the radio when I drive. I zone out in a sort of meditative state. I think you’re always allowing yourself to think about things in the car.” Oddly, the gallery show features a life-sized interactive pelican sculpture suspended from the ceiling, which flaps when one pulls a chord beneath its chest. Israel says the bird is his spirit animal. “On the beach, at different moments, they were flying into the shot and sometimes it was cool because it looked great. I kept thinking, ‘This isn’t coincidence; this is something I should pay attention to.’ It’s a great bird. It flies up and down the coast and over the waves. It’s also the closest living bird to the pterodactyl.”

Israel explains how he hired a puppeteer, but invoked a flying style redolent of Leonardo da Vinci’s flying machines. They also widened the pelican’s eyes (kawaii- style) and gave it a happy smile. And with the historical, natural lesson done, Israel scarcely misses a beat, and is back on track and on-brand: “There’s one final element to this show, which is a short video on Gagosian.com and on Instagram. It’s a little video, like a trailer to this show.” He explains further: “It begins with a pelican diving down to eat a fish, which creates a ripple that turns into these waves that travel from California, all the way across the Pacific to Hong Kong, where they bring joy to the island. And why Hong Kong? Of course because LA and Hong Kong are two different places in the same ocean. They know the same waves, the same energy. So that’s the logic.”

Of course it is, because real life and the movies can make logic of anything and nothing, both everywhere and nowhere. “In Mexico in February, I saw this house that inspired the colour of the walls,” he tells me later. “But it’s not just art – it all feeds into this stuff. I was born watching TV and reading comic books, and all that stuff assimilates… Oprah, Michael Jackson, et cetera…” And in the vivid, multiverse ecosystem of Israel, everything’s 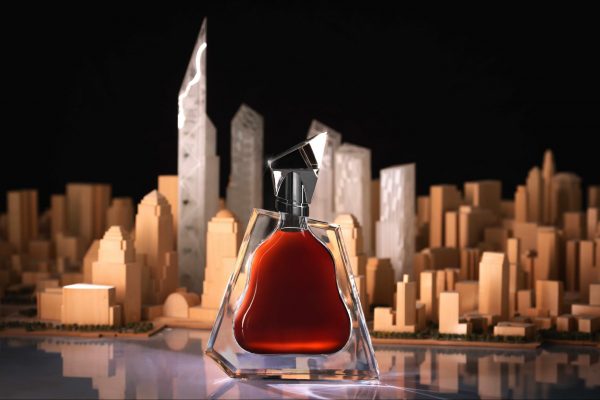